A False Sense of Superiority: Racial Prejudice and Cultural Appropriation 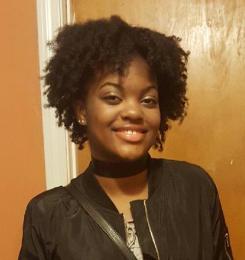 eya Nycole McClendon,  to share her work with us.  Her capstone project focuses on the social injustices faced by people of African descent in the United States. Her project displays the reality of cultural appropriation and racial prejudice in America. In her own words…

“The first painting that I completed is called ‘The Power of Knowledge’ and it depicts the murder of an African-American woman with her graduation cap and formal dress.

My reason for making the theme of murder one that I included in my series was my anger about the brutal murder of Emmett Till. This artwork was to capture the essence of the youth in a recent high school graduate, and the early death she was experiencing, courtesy of racism. I made the child a girl to make it known that it didn’t have to be a black boy that dies to make me upset about the issue, because there are many young black girls getting harassed and killed by racists as well. My reasoning behind making the sky blue was to depict that the woman was being hung in broad daylight and no one seemed to care.
The second painting that I compl 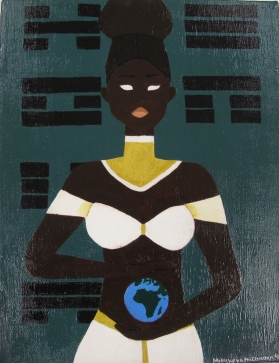 eted is called ‘African Queen‘ and it was based off of my
view of how some men see African-American women. The point of this painting was to depict the fact that some men and women fetishize black women for their assets and what an African-American woman is stereotyped to be like: having an attitude, having a large behind, big breasts, curvaceous bodies, big lips and brown skin. The meaning of having the earth between her hands based off of the view of some men and women that African-American women are some other-worlds goddesses that open up the portal to the world so that man may drink from the pure springs of life. This statement was formulated after I watched a Black Web-series on YouTube that brought up social issues, specifically racism and fetishism of Black women. The trigram symbols set in the background symbolize: water, fire, earth(rock), wind, heaven and mountains. I included these symbols just to emphasize that this woman is the queen of the world.”

View all posts by moralmondayct