Our nation needs a moral revival.

That’s why, poor and disenfranchised people, clergy and moral leaders nationwide are launching the Poor People’s Campaign: A National Call for Moral Revival. Will you join us?

Fifty years ago, Dr. Martin Luther King and others called for the original Poor People’s Campaign to foster a revolution of values in America. But that vision was tragically cut short.

With extremists who stand against voting rights, living wages, health care and immigration reform gaining even more influence today in Washington and in statehouses across the country, the need for a new moral movement in the U.S. is more urgent than ever.

On December 4, 2017, we announced our movement will unite tens of thousands of people across the country to engage in direct action at statehouses and the U.S. Capitol next spring – a six-week protest highlighted by one of the largest waves of civil disobedience in U.S. history.

We need you to step up and join our efforts.

Please add your name if you’re ready to join our movement to transform the political, economic and moral structures of the country.

Together, we can make this country live up to its ideals.

P.S. Our movement is uniting people of every race, sex, creed, sexuality and party behind a common moral agenda. Add your name and join our movement for a moral revival in this country. 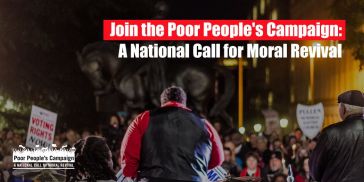 moralmondayct.org/2020/03/18/statement-regarding-states-attorney-hardys-report-regarding-the-killing-of-anthony-jose-chulo-vega-cruz/
Please join us! #MoralMondayCT
#GivingTuesday
When we stand in #solidarity and fight back, they have no choice but to fold. #nopersonisillegal #moralmondayct http://ow.ly/DmoS50wZbgf
%d bloggers like this: