The Force is Strong with Us

As debate rages on about Beyonce’s Super Bowl “Formation,”  the media is hypnotized by the truculence of the Trump candidacy, the Dept. of Justice prepares to takes aim at Ferguson leaders for failing to overhaul their justice system, and police violence continues to afflict communities of color, it is clear America is struggling with authority, power and race.

The #BlackLivesMatter movement deepens the national dialogue on violence and the role of the state legacy and evolution of state-sanctioned violence against black and brown people in the United States.  Young black men are nine times more likely than other Americans to be killed by police, according to a 2015 Guardian study that tallied 1,134 deaths at the hands of law officers that same y 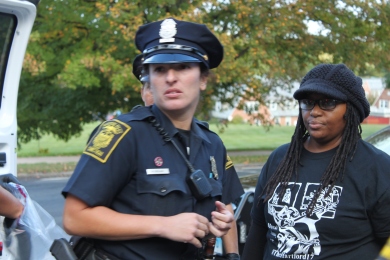 ear. The death of Kenneth Stephens, Burlington, VT in December means that all 50 states and the District of Columbia had at least one death caused by police in 2015.

Here in America, police are “agents” of the state and as such, are professionally, vocationally, oath-fully bound by the social contract.   They have the ultimate power—the right to kill on behalf of the State.

“A state that allows its agents to kill, to beat, to tase, without any real sanction, has ceased to govern and has commenced to simply rule.”

Police violence against black and brown people is called out again and again on social media.  If officers cannot be expected to act any better than ordinary citizens — have no more training or tools to diffuse highly charged encounters, or to serve those with cognitive limitations or mental illness — what credibility do they have? Why invest them with any more power or force?   What qualifies them to play these roles?    When and how did we decide that it is a good idea or a moral act for the police to de-escalate by killing?

Evidence suggests that America has a proclivity to overly on law enforcement — most notably in the education system and in treatment for people with mental illnesses. Over time, we have shut down mental health hospitals and shifted to homeless shelters and mass incarceration.  The criminal justice system has “picked up the slack” for lack of mental health treatment options and capacity.

Further, and most galling to some, is that if and when police misconduct occurs, prosecutors are reluctant to bring charges against police,  because they often rely on officers to gather information and serve as witnesses in other cases. And juries tend to be deferential to officers.

But our force is awakened, and its is strong with us.

Black Lives Matter is everywhere and gaining strength and celebrity.  Moral Monday CT is here to stay.  Learn about Moral Monday CT’s demands and position on police violence,  and then become a thought leader.

With you, we can’t lose. During Black History Month, truth-telling and freedom-fighting endure “and righteousness like an ever-flowing stream.”

View all posts by moralmondayct

Please join us! #MoralMondayCT
#GivingTuesday
When we stand in #solidarity and fight back, they have no choice but to fold. #nopersonisillegal #moralmondayct http://ow.ly/DmoS50wZbgf
Thank you candidates, Trinity College President Joanne Berger-Sweeney, CT State Representative Robyn Porter and Trinity College Black Women's Organization (TCBWO) for making CT Black Women's Meet and Greet a beautifully inspiring experience! In community Black women candidates inter-generationally connecting, encouraging and supporting one another in care and true regard. We salute you!💕 #BlackWomenRun #CTBlackWomen #GoTrinityCollegeBlackWomensOrganization
%d bloggers like this: